Finding a suitable material for hydrogen storage at ambient atmospheric conditions is challenging for material scientists and chemists. In this work, using a first principles based cluster expansion approach, the hydrogen storage capacity of Ti2AC (A = Al, Ti, Cr, Mn, Fe, Co, Ni, Cu, and Zn) MAX phase and its alloys were studied. We found that hydrogen is energetically stable in Ti-A layers in which the tetrahedral site consisting of one A atom and three Ti atoms is energetically more favorable for hydrogen adsorption than other sites in the Ti-A layer. Ti2CuC has the highest hydrogen adsorption energy than other Ti2AC phases. We find that 83.33% Cu doped Ti2AlxCu1-xC alloy structure is both energetically and dynamically stable and can store 3.66 wt% hydrogen at ambient atmospheric conditions, which is higher than both Ti2AlC and Ti2CuC phase. These findings indicate that the hydrogen capacity of the MAX phase can be significantly improved by doping an appropriate atom species.

Spin gapless semiconductors exhibit a finite band gap for one spin channel and a closed gap for another spin channel, and they have emerged as a new state of magnetic materials with a great potential for spintronic applications. The first experimental evidence for spin gapless semiconducting behavior was observed in an inverse Heusler compound Mn2CoAl. Here, we report a detailed investigation of the crystal structure and anomalous Hall effect in Mn2CoAl using experimental and theoretical studies. The analysis of the high-resolution synchrotron x-ray diffraction data shows antisite disorder between Mn and Al atoms within the inverse Heusler structure. The temperature-dependent resistivity shows semiconducting behavior and follows Mooij's criteria for disordered metal. The scaling behavior of the anomalous Hall resistivity suggests that the anomalous Hall effect in Mn2CoAl is primarily governed by an intrinsic mechanism due to the Berry curvature in momentum space. The experimental intrinsic anomalous Hall conductivity (AHC) is found to be ∼35 S/cm, which is considerably larger than the theoretically predicted value for ordered Mn2CoAl. Our first-principles calculations conclude that the antisite disorder between Mn and Al atoms enhances the Berry curvature and hence the value of intrinsic AHC, which is in very good agreement with the experiment.

The oxygen deficient site on the catalyst has a strong impact on the activation of CO2 for the synthesis of dimethyl carbonate (DMC). The Co3O4/CeO2 catalyst exhibits multiple reduction behavior as cobalt metal species differ in the strength of their interaction with CeO2. This causes the surface reduction from Ce4+ to Ce3+ in solid solution Co-O-Ce. The dispersion of Co3O4 enhanced the formation of oxygen deficient site as revealed by XPS, CO2-chemisorption and TPR. The non-precious Co3O4/CeO2 nanorod was recognized as a potential catalyst for promoting Ce4+ to Ce3+ for CO2 activation and dimethyl carbonate synthesis (81.5% of yield). Energetics of oxygen vacancy formation of low index surfaces of CeO2 was determined with first-principles calculations based on DFT. Results disclosed the Ce4+ to Ce3+ formation energy of CeO2 due to Co substitution and corroborated the experimental results. Further, calculations provide the details of the effect of Co substitution on the electronic structure of reduced CeO2 surfaces. Estimated CO2 adsorption energy indicates (110) as the most active surface for activation of CO2.

Universal Ligands for Dispersion of Two-Dimensional MXene in Organic Solvents Identifying the existence of specific functional groups in MXenes is a difficult topic that has perplexed researchers for a long time. At the same time, the realization of intrinsic ferromagnetism, which is important for two-dimensional (2D) materials’ families, is one of the fascinating properties that MXenes offer. Here, using first-principle calculations, we have examined the actual magneto-transport phenomena in transition metals and nitride-based-functionalized MXenes. We demonstrate that intrinsic anomalous Hall conductivity (AHC) can be used to identify the presence of more probable functional groups. The maximum AHC at Fermi energy, EF, is found in the case of Mn2NO2 (470 S/cm), which is attributed to the presence of avoided band crossing and a larger density of states. Together, when considering all the studied systems, the AHC can be above 2500 S/cm within EF± 0.25 eV. Our findings could be useful not only in guiding the experimentalists by considering AHC as a possible tool in determining the most probable functional groups in 2D ferro(i)magnets but also in designing memory devices with negligible stray fields.

Effective Formation of a Mn-ZIF-67 Nanofibrous Network via Electrospinning: An Active Electrocatalyst for OER in Alkaline Medium

Finding the active center in a bimetallic zeolite imidazolate framework (ZIF) is highly crucial for the electrocatalytic oxygen evolution reaction (OER). In the present study, we constructed a bimetallic ZIF system with cobalt and manganese metal ions and subjected it to an electrospinning technique for feasible fiber formation. The obtained nanofibers delivered a lower overpotential value of 302 mV at a benchmarking current density of 10 mA cm–2 in an electrocatalytic OER study under alkaline conditions. The obtained Tafel slope and charge-transfer resistance values were 125 mV dec–1 and 4 Ω, respectively. The kinetics of the reaction is mainly attributed from the ratio of metals (Co and Mn) present in the catalyst. Jahn–Teller distortion reveals that the electrocatalytic active center on the Mn-incorporated ZIF-67 nanofibers (Mn-ZIF-67-NFs) was found to be Mn3+ along with the Mn2+ and Co2+ ions on the octahedral and tetrahedral sites, respectively, where Co2+ ions tend to suppress the distortion, which is well supported by density functional theory analysis, molecular orbital study, and magnetic studies.

We propose a general rule for estimating the magnetic moments of Co2(cobalt)-based Heusler alloys, especially when doped with late transition metals. We come up with a descriptor that can characterise both pure Co2YZ compounds and the doped ones with the chemical formula Co2Y1−xMxZ (M is the dopant) using online data for magnetic moments of Heusler alloys with Co2YZ structure and compressive sensing approach. The newly proposed descriptor not only depends on the number of valence electrons of the compound also it depends on the number of unoccupied d-electrons in the doping site. A comparison of the performance of the proposed descriptor and the Slater-Pauling rule is made. Unlike the Slater-Pauling rule, which is only effective for half-metallic Heusler compounds, our machine-learning approach is more generic since it applies to any Co2YZ Heusler compounds, regardless of whether they are half-metals or not. We use this new rule to estimate the magnetic moments of a few yet-to-be-discovered Heusler compounds and compare the results to density functional theory (DFT) based calculations. Finally, we use DFT and machine learning investigations to prove their stability.

The outstanding properties of graphene have laid the foundation for exploring graphene-like 2D systems, commonly referred to as 2D-Xenes. Among them, silicene is a front-runner due to its compatibility with current silicon fabrication technologies. Recent works on silicene have unveiled its useful electronic and mechanical properties. The rapid miniaturization of silicon devices and the useful electro-mechanical properties of silicene necessitate the exploration of potential applications of silicene flexible electronics in nano electro-mechanical systems. Using a theoretical model derived from the integration of ab initio density-functional theory and quantum transport theory, we investigate the piezoresistance effect of silicene in the nanoscale regime. As with graphene, we obtain a small value of the piezoresistance gauge factor (GF) of silicene, which is sinusoidally dependent on the transport angle. The small GF of silicene is attributed to its robust Dirac cone and strain-independent valley degeneracy. Based on the obtained results, we propose to use silicene as an interconnect in flexible electronic devices and as a reference piezoresistor in strain sensors. This work will hence pave the way for exploring flexible electronics applications in other 2D-Xene materials.

We introduce introduces an open-source program for calculating the properties of solid solutions, “Python Package for Property Prediction of Pseudobinary systems using Grand canonical ensemble” (P5Grand). P5Grand uses two main strategies to improve calculation efficiency: random configuration sampling and separate calculations of the strain energy induced by local compositional fluctuations within the grand canonical ensemble. P5Grand can efficiently calculate thermodynamic properties and any properties of interest for arbitrary solid solution as a function of temperature and composition using two input files. The efficiency of P5Grand is demonstrated by the bandgap prediction of (In,Ga)As. 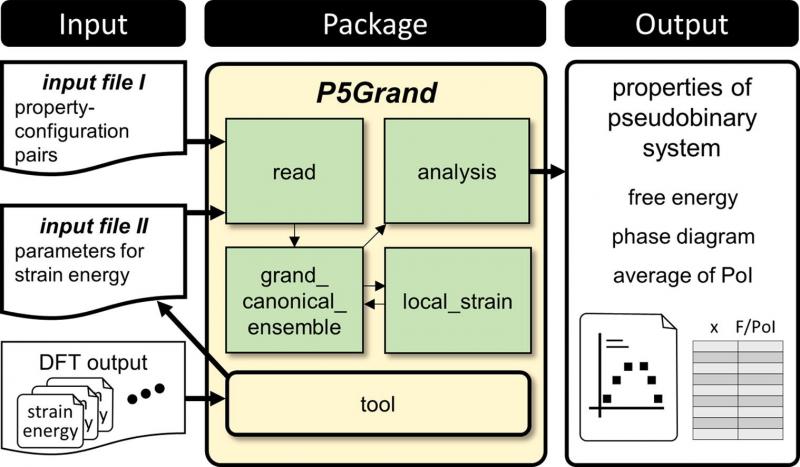 The development of efficient electrocatalysts for the water splitting process and understanding their fundamental catalytic mechanisms are highly essential to achieving high performance in energy conversion technologies. Herein, we have synthesised spinel nickel ferrite nanofibers (NiFe2O4-NFs) via an electrospinning (ES) method followed by a carbonization process. The resultant fiber was subjected to electrocatalytic water splitting reactions in alkaline medium. The catalytic efficiency of the NiFe2O4-NFs in OER was highly satisfactory. But it is not high enough to catalyse the HER process. Hence, palladium ions were decorated as nanosheets on NiFe2O4-NFs as a heterostructure to improve the catalytic efficiency for HER. Density functional theory (DFT) confirms that the addition of palladium to NiFe2O4-NFs helps to reduce the effect of catalyst poisoning and improve the efficiency of the catalyst. In an alkaline hybrid electrolyser, the required cell voltage was observed as 1.51 V at a fixed current density of 10 mA cm−2.