There are various well-established methods to calculate such energy barriers. The nudged elastic band (NEB) is one of the efficient methods which work by converging a trial initial path in the PES to the MEP in the vicinity of the initial path. A minor modified version of such method, also known as climbing image NEB (CI-NEB) which employs mostly the basic NEB method but forces one of the images to be at the maximum of PES. Recently, an automated procedure known as AutoNEB has been proposed which use fewer resources than standard NEB method.

In our PASTA package, we have implemented all the three methods: NEB, CI-NEB and AutoNEB, thus providing a whole suit of such methods.

The PES is generally obtained by the use of Density Functional Theory (DFT). For NEB and CI-NEB, DFT calculations are performed to obtain the total energy and the forces. Currently PASTA is interfaced with the following DFT codes: Vienna Ab initio Simulation Package (VASP), Spanish Initiative for Electronic Simulations with Thousands of Atoms (SIESTA) and Quantum Espresso (QE). In NEB, a chain of states of the system (known as images) are connected together via Hook’s springs forming an elastic band is used to obtain the MEP.  For CI-NEB, the image with highest energy after few regular NEB-steps is moved upward by removing the spring force on it and including the inverted parallel component of the true force (which is obtained from the PES). In AutoNEB, a subset of total images is first roughly converged and then a new image is added. The piece of the path centering the new image is then converged. The new image is added either in the biggest geometrical gap or energy gap. This procedure is repeated. 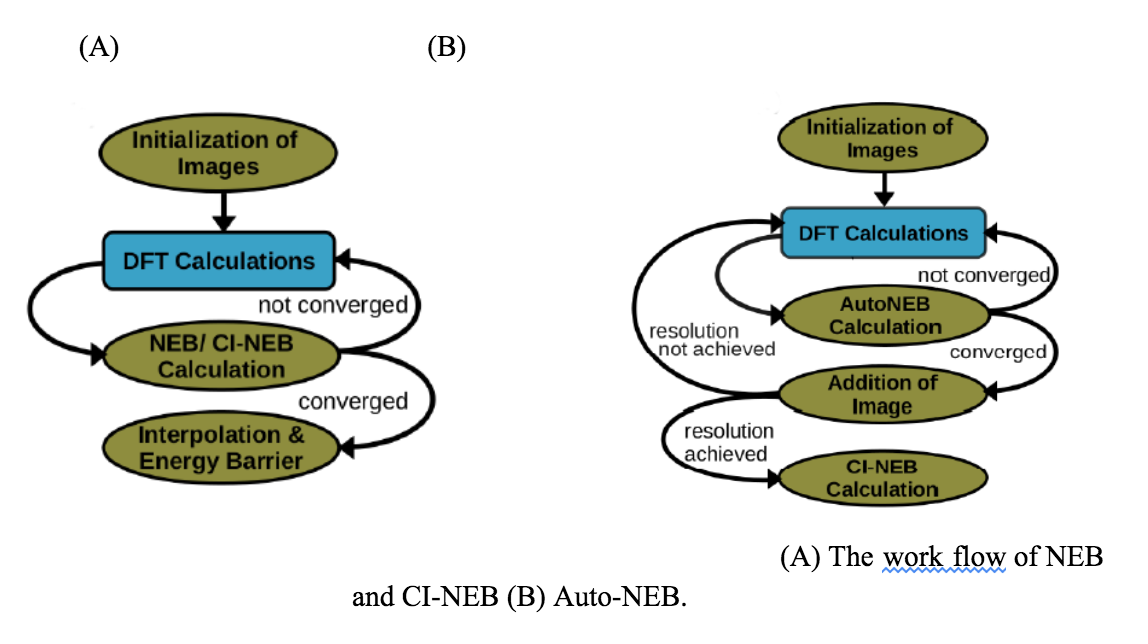 PASTA is written entirely in Python. It has been tested with Python2.7 and Python3.5.PASTA uses four optimization algorithms: Steepest descent (SD), conjugate gradient (CG), quick-min (QM) and Broyden-Fletcher-Goldfarb-Shannon (BFGS) to find the minimum in the PES. It also contains utility program to analyze and visualize the results.